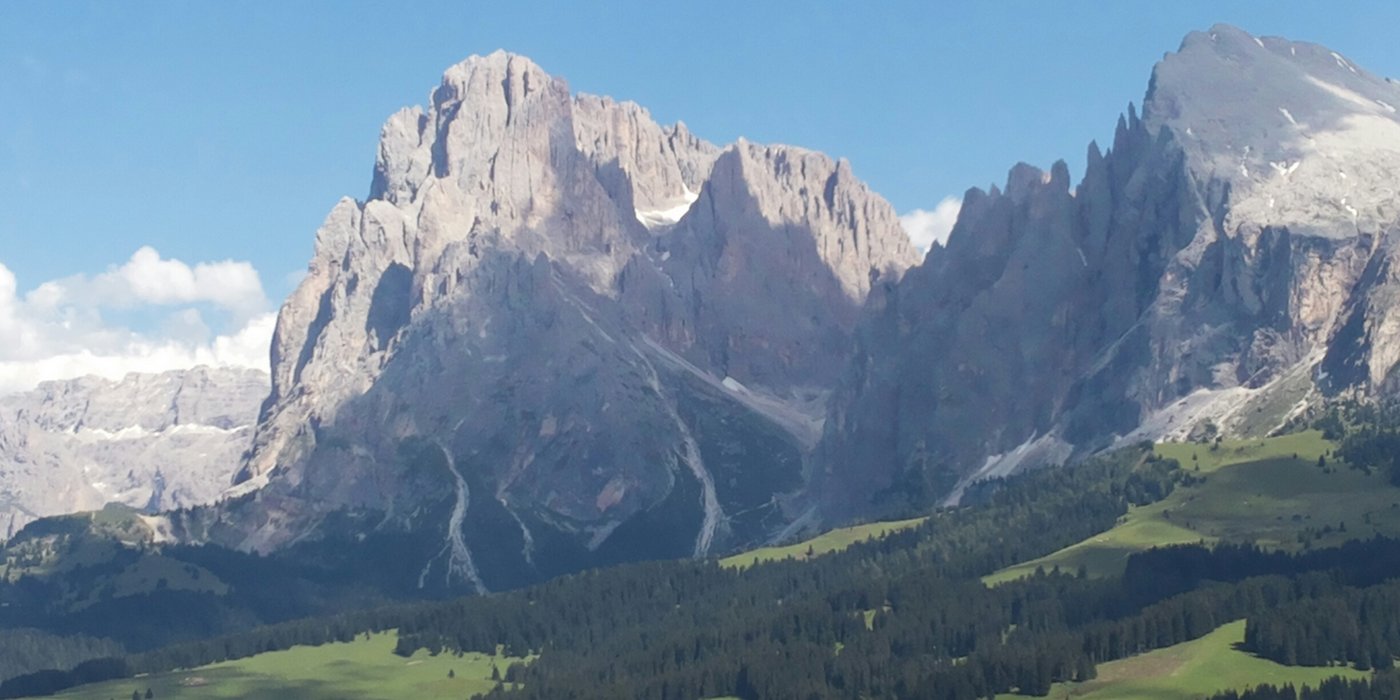 The Dolomites in South Tyrol Italy

"Dolomia and Dolomites, a particular rock that distinguishes the nicest mountains in the world. A paradise for the lovers of sports and itinerant tourism, or for those who prefer relaxing holidays".

The Ritten (Renon) has the best panoramic view to the Dolomites and is good point to start for all Dolomites tours.

They originated on the sea bed millions of years ago, while today towers and spires of the Dolomites soar skywards in Italy’s northernmost province exceeding 3,000 metres (9,850 ft) elevation, for example the Drei Zinnen. They were named Dolomites after the geologist Déodat de Dolomieu and in 2009 their unique beauty was recognised by UNESCO which designated them a world natural heritage property. The inhabitants love their ‘pale mountains’ and not only since they became world famous. For the majestic rocks have strongly characterised the region and its people since time immemorial and have made South Tyrol what it is today: a region of contrasts. For this reason we entreat you not just to admire them, but also to explore them.

The Dolomites have many faces: steep and craggy, enchanting and green or even soft powdery white.

Whoever has stood at the feet of the “Three Peaks” or of the mighty icy block of the Marmolada (3,242 m) – the only glacier in the Dolomites – or has lain in the soft green grass next to an alpine hut, knows how varied and diverse the experience of the “pale mountains” can be. The uniqueness lies in the sudden change from soft, green slopes to steep, craggy mountains. This landscape is predestined to be the scene for the most varied kinds of sports. Both in summer and winter.

However, should you see the Dolomites simply as an oversized piece of sports equipment, then you are greatly mistaken. The views are too breathtaking, the landscape too eye-catching and impressive. It goes without saying that the valleys, which have been inhabited for thousands of years, are characterized by an extremely rich culture. A culture which can be experienced today, embedded in strong traditions yet modern and in keeping with the times.

The Dolomites don’t however owe their name to a local. It was the French adventurer and scientist Deodat de Dolomieu who discovered in 1789 that the stone, which the Dolomites are made of, doesn’t only contain calcium carbonate, which is typical of limestone, but also a large amount of magnesium. Thus the mountains were given the name they still have today in his honour.

Hotel **** WeihrerhofDolomites›Region›Dolomites
Our hotel
SeaSpa
Rooms
Active
OK
This website uses cookies. The use of cookies is regulated in European Directive 2009/136/EC (E-Privacy). We also use the Facebook pixel and Remarketing technologies from Google. By clicking on "OK" you agree. To protect your privacy, you can customize your preference management regarding online advertising in the current browser here. To stop third-party tracking technologies used on this website from using your information for personalized online advertising, click "Opt-Out".
Weather
Position
Rooms
Gallery
360°